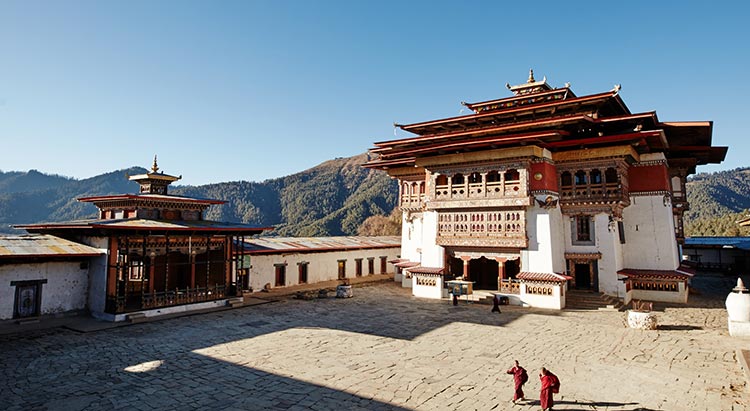 Day 01: Arrive Paro by Druk Air & transfer to Thimphu
Fly into Himalayas with Druk Air, Bhutan’s National Air Carrier. The green walls of the hills known as dooars or gateways, in to Bhutan from the plains of India rise ever higher as the plane flies north towards the Tibetan border. Silvery rivers rush along the valleys, waterfalls plunge down the forested mountainsides, and to the north, the great snowcapped peaks of the inner Himalayas rise up to the heavens. Farm houses dot the hillsides on either side of the plane.

As the aircraft enters the Paro valley, look down and you will see the Paro Dzong on the hillside overlooking Paro Chu (river) with Ta Dzong, formerly a watchtower and now the National Museum, above it. Received by our representative at the airport and transfer to Thimphu, the modern capital town of Bhutan.

Day 02: Thimphu
After breakfast, sightseeing in Thimphu valley including visit to the following : the National Library, housing an extensive collection of priceless Buddhist manuscripts; the Institute for Zorig Chusum (commonly known as the Painting School) where students undergo a 6-year training course in Bhutan’s 13 traditional arts and crafts. Later visit Textile and Folk Heritage Museum, a fascinating testimony of the Bhutanese material culture and living traditions.

After lunch, visit King’s Memorial Chorten continuously circumambulated by people, murmuring mantras and spinning their prayer wheels. Construction of this landmark was the idea of Bhutan’s third king, His Majesty Jigme Dorji Wangchuk (“the father of modern Bhutan”) who has wished to erect monument to world peace and prosperity. Completed in 1974 after his untimely death, it serves both as a memorial to the Late King and as a monument to peace.

Evening drive past Trashichhoedzong, “fortress of the glorious religion”. This is the center of government and religion, site of monarch&’ throne room and seat of Je Khenpo or Chief Abbot. Built in 1641 by the political and religious unifier of Bhutan, Shabdrung Ngawang Namgyal, it was reconstructed in 1960s in traditional Bhutanese manner, without nails or architectural plans.

Later visit to Punakha Dzong, Built strategically at the junction of Pho Chhu and Mo Chhu rivers in 1637 by Shabdrung Ngawang Namgyal to serve as the religious and administrative centre of the region, Punakha Dzong has played an important role in Bhutan’s history. Damaged by four catastrophic fires and an earthquake, the Dzong has been fully restored by the present King.

Overnight at the hotel in Punakha.

Day 04: Punakha
After breakfast excursion to Chimi Lhakhang, situated on a hillock in the centre of the valley. It is dedicated to Lama Drukpa Kuenley, who in the late 15th century used humour, songs and outrageous behavior to dramatise his teachings and due to this also known as “Divine Madman”. This temple is also known as the temple of fertility. It is widely believed that couples who do not have children and wanting one, if they pray at this temple, they are usually blessed with a child very soon. It is about 30 minute walk across field from the road to the temple. The trail leads across rice fields to the tiny settlement of Pana, meaning “field”. It then follows a tiny stream downhill to Yoaka and across more fields before making a short climb to Chimi Lhakhang.

Afternoon explore Punakha locan market and town. Overnight at the hotel in Paro.

Day 05: Punakha / Bumthang (205 km, approx 7 hours drive)
After breakfast, drive across Pele-la pass (3,300m/10,830 ft), the traditional boundary between east and west. The pass is marked by a large white chorten prayer flags. There is an abrupt change in vegetation at this point, with mountain forest replaced by high altitude dwarf bamboo. Stop en route at Chendbji Chorten, patterned on Kathmandu’s Swayambhunath Stupa, with eyes panted at four cardinal points. It was built in the 18th century by Lama Shida from Tibet, to cover the remains of an evil spirit that was subdued at this spot.

Further ahead visit Trongsa Dzong. Like almost all towns in the Kingdom, this Dzong architecture dominates the entire Trongsa horizon dwarfing the surrounding buildings. Built in 1648, it was the seat of power over central and eastern Bhutan. Both the first and second King ruled the country from this ancient seat.

Then drive further to Bumthang, 68 km from Trongsa, a journey of about 3 hours, over the Yutong-la pass (3,400m/ 11,155 ft). The road winds steeply up to the pass, 28 km from Trongsa, then runs down through coniferous forest into a wide, open cultivated valley known as the Chumey valley.

Overnight at the hotel in Bumthang.

Day 06: Bumthang
Bumthang is the general name given to combination of four valleys – Chumey, Choekhor, Tang and Ura with altitude varying from 2,600m to 4,000m. The fascinating valley is the heartland of the nation and home to some of the oldest Buddhist temples and monasteries. Its gentle sloping hills offer plenty of walking opportunities to many tempels that dot this valley. The valley is also famous for the production of honey, cheese, apples and the yathra – woolen colourful material that has multiple uses.

Visit to Kurje Lhakhang, where the saint Padmasambhava subdued a local demon and left his body imprint on a rock., the Jambey Lhakhang (7th century temple), Tamshing Lhakhang (housing some of the oldest wall paintings in Bhutan) and Jakar Dzong (administrative center of the region). Stroll in the village, visit the little handicrafts shop at the entrance to the town, and perhaps take refreshments at a local restaurant.

Day 07 : Bumthang / Punakha (205 km, approx 7 hours drive)
After breakfast drive to Punakha en rotue visit Ta Dzong, a cylindrical stone structure rising five storeys, was built in 1652 by Chogyal Minjur Tempa, a task entrusted to him by Zhabdrung Ngawang Namgyal. After more than 350 years, it has been resurrected into a classy museum, that represents a tasteful blend of tradition and modernity.

Overnight at the hotel in Punakha.

Afterwards, walk down a hillside trail to visit Rinpung Dzong. Built in 1646 by Shabdrung Ngawang Namgyal , the first spiritual and temporal ruler of Bhutan, the Dzong houses the monastic body of Paro, the office of the Dzongda (district administrative head) and Thrimpon (judge) of Paro district.

Day 09: Paro
After breakfast drive up the valley to view the ruins of Drukgyel Dzong. It was from here that the Bhutanese repelled several invading Tibetan armies during the 17th century. Nearby visit traditional Bhutanese Farm House which offers good insight into lifestyle of local people.

Then take an excursion to Taktsang Monastery, the most famous of Bhutanese monasteries. It is said that Guru Rinpoche arrived here on the back of a tigress and meditated at this monastery hence it is called “Tiger&’s Nest”. The excursion to monastery takes about 5 hours for round trip.

While return to Paro town visit en route Kyichu Lhakhang, one of the oldest and most sacred shrines of the Kingdom.

Day 10: Depart Paro
After breakfast transfer to the airport for flight to onward destination.

✓ Accommodation on ONE TWIN / DOUBLE ROOM in 3 star hotels
✓ All meals with bottled drinking water
✓ Professional Private Guided Tour
✓ All transfers as mentioned in a private vehicle, and sightseeing.
✓ Sightseeing tour will be provided as per the itinerary in a private Vehicle.
✓ All entrance and monuments fees.
✓ Visa fees for Bhutan only.
✓ All current taxes as on date; subject to change as per hotel/airline/Government policy.

✗ Any Airfare.
✗ Tipping to guides and drivers.
✗ Any Insurance and rescue of any form.
✗ Cost arising out of flight cancellation/road blockades/landslides/riots and events beyond our control.
✗ Expenses of personal nature and any other expenses not mentioned in the above cost.
✗ Any international air fare/airport taxes not mentioned above
✗ Hotel surcharges during festival period
✗ Any change in tax structure resulting from the hike in published tariff.
Items of personal nature like tips, laundry, phone calls etc.
✗ Any video/still camera fee to the monuments and places of visit
✗ Any other item not explicitly mentioned under price includes.
✗ Any airfare for domestic flights other than the quoted details.
✗ Any cost of the meals other than the one indicated in room meal plan.